Jeffery's daughter Kaitlyn took part in a study looking at the treatment of childhood pneumonia. 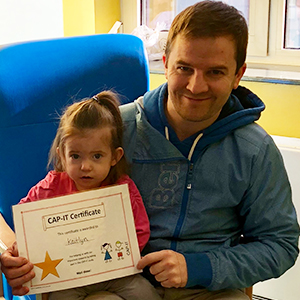 Clevedon dad Jeffery talks about the decision to include his daughter Kaitlyn in the CAP-IT study at University Hospitals Bristol. CAP-IT is investigating whether lower doses and shorter durations of prescribed antibiotic amoxicillin is still effective at treating childhood pneumonia.

Jeffery says: “My daughter was born early at 30 weeks so as a result she suffers a little bit with chest complaints. She’s nearly two now. She had been poorly for about six weeks with a horrible cough. She then took a turn for the worse and was taken to the hospital where we found out she had developed pneumonia.”

“I assumed they were going to give Kaitlyn a course of amoxicillin,” Jeffery continues. “The staff at the hospital asked me if I wanted my daughter take part in an amoxicillin trial, in which she would be given four days of amoxicillin followed by four days of possible placebo. The research was looking at what length of time it should be taken for. I am happy to do things like that and be involved in research.

I agreed to the trial, went back a month later and we went through the ins and outs of the study

Amoxicillin is an antibiotic most commonly used for treating bacterial infections such as pneumonia.  It is considered to be very safe and has been used for a long time to treat the condition. However, the use of antibiotics can lead to changes in bacteria carried by the person taking them, making the bacteria become more resistant to the effects of the antibiotics. As a result, infections caused by resistant bacteria are more difficult to treat.

The overall aims of the CAP-IT study made sense to Jeffery: “I already thought that amoxicillin courses are too long. I end up losing track of what I need to give. Generally, she tends to feel better after four or five days of amoxicillin but we still haven’t finished the course.”

Jeffery had no fears about signing up his daughter to a trial: “I didn’t feel like I was putting my daughter in any harm’s way by potentially giving her less amoxicillin.  However I am fairly sure she had the placebo as she didn’t like the second course of treatment.”

This might be because Jeffery has previous experience of contributing: “My son was born at 24 weeks and he took part in an oxygen trial to find out if there was other ways to give premature babies oxygen. So I knew there was lot of research going on around the Hospitals and I don’t mind taking part. I think certain research is important as it can save money and improve the health of patients.”

Overall, Jeffery has this message for other parents approached about their children taking part in research studies: “If people don’t take part how will they find ways to improve treatment? If we don’t find out better ways of doing things we will be living as we did 30 or 40 years ago.  Things have been improved one hundred- fold since then. Everything can always be improved. I don’t think many people sign up to research especially with their children. Perhaps they are little bit reluctant in getting involved in something like that. But at the end of the day taking part can potentially help someone else.”