From black and white to colour

Research nurse Angus Sturrock shares a moving experience of how an aspiring artist's outlook on life was transformed through joining a clinical trial, aiming to improve mental health treatments. He explains how the act of getting involved in research can make a difference to patients wellbeing, even when treatments are deemed to make little difference medically.

I’ll never forget Lynda, she taught me something very special about clinical research.

I qualified as a mental health nurse in 2006 and became a research nurse in 2012. It was very early in my research career, in fact, it was the first study that I helped to deliver after joining the R&D team at Bradford District Care NHS Foundation Trust in 2013.

Bradford District Care NHS Foundation Trust is primarily a mental health trust, but also supports physical health and social care research. Back in 2013 one of the studies we were supporting advertised in the local press that it was looking for participants to trial a new treatment for depression. The study aimed to find out if the new drug could help reduce cortisol levels, which are associated with stress, and if this would result in antidepressant medication working more effectively. Lynda and her husband responded to the advert and Lynda was soon enrolled in the trial.

Lynda suffered with very severe depression and, as a result, she had more or less lived on the ward of the mental health hospital for around a year. Eventually she was discharged to live with her husband in the community. She lived at home for 15 years but she still struggled with her condition. Lynda told me that when she was at home she would often just sit in the kitchen with her head in her hands. She never went out.

Lynda also told me that she was a keen artist and she always drew pictures which reflected how she felt. The ones she showed me were all monotone (black and white) which, Lynda explained, is how she saw the world. Often the pictures depicted Lynda surrounded by dark clouds, or trapped in a deep hole, frequently with negative words around her.

The trial she took part in was a randomised double blind trial, so we had no way of knowing if Lynda was receiving the trial medication or a placebo. Lynda would come to the clinic every couple of weeks for blood tests and to see how she was doing generally. It was on one of these visits she told that she was convinced she was on the trial medication because, for the first time in her adult life, she had begun to see the world in colour. 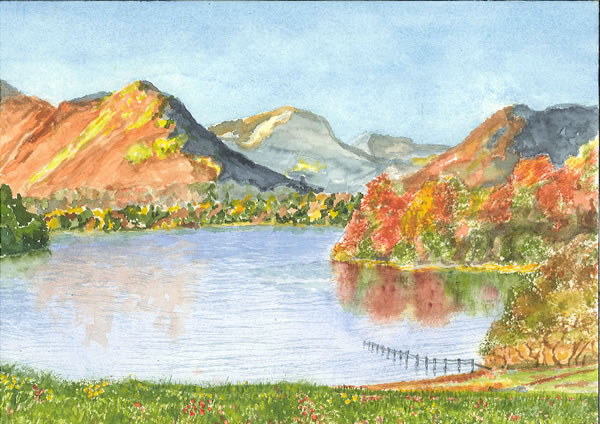 Soon Lynda had also begun to take a lot more active interest in things. She even joined an art group which went out and about drawing and painting. Finally, she was getting out of the house. During her last visit to the clinic for the study  Lynda showed me a painting she had recently done. It was of a landscape with a lake and the colours were vibrant and beautiful. The transformation was really something to behold.

But what really stayed with me is what happened next.

When the trial ended we learned that Lynda was indeed on the trial medication, not the placebo. However, the overall results of the trial revealed that the medication hadn’t made a significant difference and, therefore, would not be taken forward as a viable treatment approach.

I’d like to think that it was Lynda’s participation in the study that helped her begin her journey away from depression. Perhaps just having that opportunity to feel part of something positive nudged her in the right direction.

It’s not all about breakthroughs and cutting edge treatments, sometimes it’s just about the individual’s experience.

Hear more from Angus’s about his experiences in the case study Not your usual nine to five job: Delivering research in care homes

The views and opinions expressed in this blog are those of the authors and do not necessarily reflect those of the NIHR, NHS or the Department of Health and Social Care.

Wine glass size may influence how much you drink in restaurants

Rethinking your CPD: Transform your learning – join a virtual community

Getting the right balance: organising a conference during a NIHR Doctoral Research Fellowship