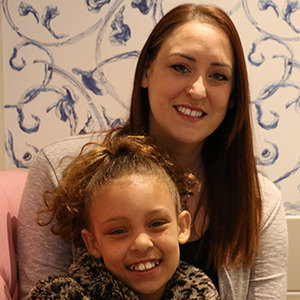 From when she was born Honor suffered with painful inflamed skin all over her body. This affected her sleep and she was often too tired to go to school.

She said: “I didn’t like it because other children would ask why I had a red face or if I had chickenpox. Sometimes it feels like the itch is so deep down in my skin that I can’t get to it when I scratch. I had to stop going to dance and swimming classes because of my eczema.”

Eczema is a condition that causes the skin to become itchy, red, dry and cracked. Scratching the itchy skin can disrupt sleep and cause bleeding and infections. It can also make itching worse, leading to sleepless nights and difficulty concentrating at school or work.

Honor said: “I feel a lot better now and I’m glad that I’m sleeping again. It’s sore sometimes if I’ve been scratching but it’s much better and I can live with it now.” Honor’s mother, Laura Klee, 36, said:

Taking part in the trial has completely transformed our lives. Before it was rare that Honor slept through the night, but now we're pretty much guaranteed a good night's sleep.

“The lack of sleep has been the biggest killer. She had broken nights from when she was a baby right up until she was seven. The bedsheets used to be covered in blood in the morning from where she had been scratching all night. Some nights she'd be screaming and pleading for me to help her, so I'd end up giving her bath or taking her on a drive at 3am just to distract her from itching.

“She got so bad that she couldn't eat because she had eczema all around her mouth, so it was very painful to stretch her mouth open and foods like tomatoes would sting.

“It wasn't just hobbies and schooling that was being affected, it was her basic levels of living that she wasn't able to do without any discomfort.”

People with eczema have an overactive immune system which makes them more sensitive to irritants, causing inflamed skin. Medications for eczema work by dampening this.

The study compared two medications - methotrexate and cyclosporine - to see which is most effective for treating severe eczema in children. Honor was given methotrexate.

Ms Klee said: “We had been offered methotrexate before, however I'd turned it down as the thought of something suppressing her immune system worried me. The fact that it was being offered as part of a trial meant that it was incredibly well monitored, so I felt happy that she was in very good hands."