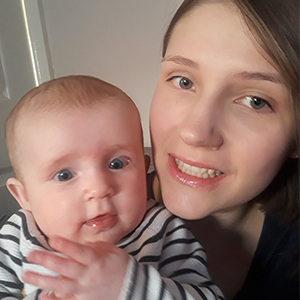 Chloe Phippard’s youngest daughter, Ava, took part in a trial to see if daily doses of insulin powder can prevent infants from developing type 1 diabetes. A study found Ava had a genetic risk of type 1 diabetes and she enrolled on another trial to attempt to prevent the condition by using the powder.

I cried when I found out about the risk because I knew what Amelia had gone through I didn’t want Ava to go through that as well.

Type 1 diabetes is a long-term condition where the body stops producing insulin, causing glucose levels in the blood to become too high. This can be life threatening and even with treatment can cause serious long-term health problems such as blindness, cardiovascular disease and stroke.

People with type 1 diabetes need doses of insulin through injections or a portable device worn on the belt which delivers it through a tube placed under the skin.

Mrs Phippard, also mother to one-year-old Alice, said: “Amelia can’t go to birthday parties or around a friend’s house for dinner without me or her dad there because someone has to be trained in how to give her insulin. There’s just certain things that she can’t really do that other kids do and wouldn’t even think anything of.”

When Ava was born, a sample of her blood - which is already collected from newborns for screening tests - was analysed for genetic risk of type 1 diabetes, with her mother’s consent.

About one percent of children will have genes which put them at a high risk of developing type 1 diabetes. After the test revealed Ava had these genes, Mrs Phippard was invited to take part in a trial to see if daily doses of insulin powder can prevent type 1 diabetes.

Participants on the trial are fed insulin powder or a placebo (dummy drug) for three years, to compare the two. Neither the researchers nor participants are told which they will receive, to prevent bias. It is hoped that the insulin can train the immune system to tolerate the body’s own insulin to prevent the onset of type 1 diabetes. There is currently no way to prevent the disease.

Mrs Phippard said: “If I can prevent another child from getting type 1 diabetes, that would be amazing. If the trial works then that’s great because no other kid or parent will have to go through what we went through. I wouldn’t wish this on anyone.

“Even if it turns out Ava got the placebo, I feel it’s better than not doing anything at all. Knowing that someone will be around regularly just to check on her just put my mind at ease.”