Case study: 'Everything we’ve been able to achieve stems from our first NIHR award'

Professor Karim Brohi’s interest in the pathology of trauma and major bleeding led him to apply for an NIHR Programme Grants for Applied Research award. His research on identifying and treating a unique coagulopathy cut mortality in trauma patients by a third and has inspired a number of further research streams. 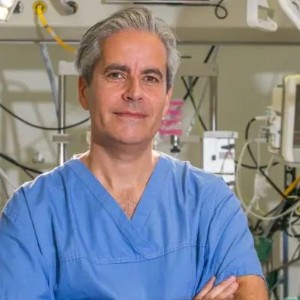 I am a consultant trauma and vascular surgeon at Barts Health NHS Trust, based at the Royal London Hospital Major Trauma Centre, one of the busiest in Europe. When I applied for my first funding award from the NIHR, I was just over a year into my consultant post. At the time, my academic career plans did not go beyond wanting to explore trauma as a disease process that I believed could be treated more effectively, if only we understood the human response to injury and its pathobiology.

Now though, I am Professor of Trauma Sciences at Queen Mary University of London and lead a multi-professional research team at the Centre for Trauma Sciences, one of only a handful of such centres worldwide. Everything we have been able to achieve over the past decade has stemmed from the initial support we received through an NIHR Programme Grant for Applied Research in 2008.

Trauma is responsible for over 11% of the entire global burden of disease, yet worldwide it is poorly understood, under-researched and grossly under-funded. At the birth of the NIHR in 2006, the funding landscape was even worse, with less than 1% of the entire national medical research budget devoted to improving understanding or outcomes from injury.

It was therefore with no little surprise that we learned we had been successful in our application for funding to NIHR’s Programme Grants for Applied Research scheme. Looking back I believe this was primarily based on two key strengths of the proposal: the subject and the team.

As one of the world’s biggest killers, with a mortality then easily over 50%, there was no question that trauma haemorrhage as a subject area was important. We had previously identified that some trauma patients’ blood does not clot properly even before they have had any blood transfusions, because clotting is disrupted by the injuries and shock state. Early, aggressive treatment had the potential to improve survival in people with this acute clotting disorder.

At the time there were no routine tests of blood clotting that could tell us within a useable timeframe whether people had this coagulopathy. Thus some patients received too few clotting factors and had worse outcomes, while others received too many and were exposed to extra risks. And this empiric kitchen-sink approach to managing these patients often wasted blood and blood products – very precious resources across the NHS.

This presented an opportunity for improving outcomes in trauma patients. We structured our research proposal into six aims, including evidence reviews, national epidemiological studies, cohort studies to inform precision approaches, and health economic assessments. Integrated outputs of these would lead to improved outcomes while reducing inappropriate blood product use.

Clearly a single NHS consultant could not deliver this research alone, and the team included established investigators from NHS Blood & Transplant, Oxford and Exeter. Furthermore the research proposal included support for a programme manager who was fundamental to the delivery of the programme and its outputs. I am sure it was the strengths and capabilities within this team, and their shared responsibility across the programme, that led both to the funding and the success of the project.

The programme grant came to an end in 2013. In that time we have reduced in-hospital mortality by around one third, produced new diagnostic approaches and therapeutic guidance. We identified a faster way to diagnose when patients’ blood is not properly clotting after trauma, and showed that treatment with specific blood products could be improved in the crucial hours immediately after trauma. Our findings have now been incorporated into national guidelines, including the 2017 NICE major trauma standards.

The core aims of the funding award have become research streams in their own right, and we have been successful in attracting follow on funding from the NIHR as well as the EU, Wellcome and MRC. The Programme Grant not only allowed us to deliver on the individual aims of the project but also demonstrated to funders that research in trauma could produce highly impactful outputs in a short timescale with moderate but targeted funding.

Our focus remains on stopping trauma patients dying by understanding the human response to injury and applying precision interventions in the first minutes and hours after injury. Applied research such as this is a fundamental rationale for the existence of the NIHR.

Karim Brohi is a trauma surgeon at Barts Health NHS Trust and Professor of Trauma Sciences at Queen Mary University of London. His work on traumatic coagulopathy was supported by an NIHR Programme Grant for Applied Research.