Dr Willie Hamilton used a number of different methods to share the findings from his NIHR-funded research and worked hard to make the connections to get the cancer risk assessment tools he developed into practice.

For ten years, Dr Willie Hamilton was a jobbing GP. Like many of his colleagues, he found that current cancer guidelines, which had been developed from the perspective of acute settings, didn’t work well in primary care. Willie and his colleagues were awarded a £2 million NIHR Programme Grant for Applied Research award to develop risk assessment tools for many different cancers.  Throughout the knowledge mobilisation phase of the research, Willie and his team kept the end user – the jobbing GP – in the forefront of their minds. 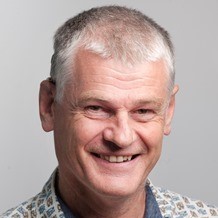 For ten years, Willie Hamilton was a jobbing GP. Like many of his colleagues, he found that current cancer guidelines, which had been developed from the perspective of acute settings, didn’t work well in primary care. Many early cancers that could have been successfully treated were going undetected. In the early 2000’s, he moved into academia to specialise in cancer diagnostics in primary care.

This was fortuitous timing. Politicians from all parties plus the Department of Health and Social Care recognised there was a problem. International comparisons showed that the UK was lagging behind other countries in the detection and treatment of cancer. This led to a national Cancer Plan, including local and national cancer action teams. The national cancer action team lead was dynamic and passionate about improving the early detection of cancer; she also had access to funding. Local cancer action teams had been set up. The leading research charity, Cancer Research UK, were keen to make a difference. The National Awareness and Early Diagnosis Initiative (NAEDI), a charity-public sector partnership, had initiated some projects. Everyone wanted a solution and knew that this required more than publishing scientific papers. But they needed the right tools.

After developing relationships with these stakeholders and carrying out smaller studies into cancer symptoms and diagnostics, Willie and his colleagues were awarded a £2 million NIHR Programme Grants for Applied Research award for the Discovery programme, which included as a major part the development of risk assessment tools in many different cancers from 2010-2016. Although many scientific papers were published, including Royal College of General Practitioners paper of the year in Lancet Oncology, to make change happen the whole team and stakeholders knew that they needed to do more.

Although it is difficult to disentangle the contributions that the Discovery programme made in tandem with and separate to many other initiatives to improving cancer detection, the following changes have been noted over the past few years:

The cumulative benefit of all the above means better cancer survival for more patients.

Although this story has focused on Willie, he did not act in isolation. From early on, he developed relationships with key influential people (lead National Cancer Action team, National Cancer Director) and created partnerships with charities, the Department of Health and Social Care, and cancer networks. These served him well by providing contacts, funding and resources to reach target audiences. He also had an excellent research team and many GP colleagues working with him.

With increased awareness of the importance of cancer diagnostics at national policy level, the timing was excellent. Through a combination of his contacts and publishing widely, Willie became well-known. Although initially, he had to work to make connections, with time he found that policy-makers, parliamentarians and other decision-makers came to him.

Many different methods were used to share the research findings - mouse mats, electronic software, local pathway development, NICE guidelines and attendance at parliamentary committees. Willie and his colleagues did not rely on just one.

The Discovery programme is one of many studies, building a lifetime of work. For example, recently Willie and his colleagues won £2.75 million from a philanthropist to test the impact of electronic risk assessment tools in a cluster randomised trial. Throughout, Willie and his colleagues have combined producing high-quality research evidence and pragmatic application with on-going evaluation.

Aim of study: To optimise symptomatic cancer diagnosis, with a specific focus on colorectal, lung and pancreatic cancers.

Methods: This programme grant was made up of several sub-studies including: