This is a new site which is still under development. We welcome your feedback, which will help improve it.

Case study: “Make sure your research question makes sense to people who aren’t interested in your area!”

Dr Damian Roland is a Consultant and Honorary Associate Professor in paediatric emergency medicine. He was awarded an NIHR fellowship in 2010 and successfully applied for RfPB programme funding in 2015. He has shared his advice on how an RfPB award as an early career researcher can be a stepping stone to a research career. 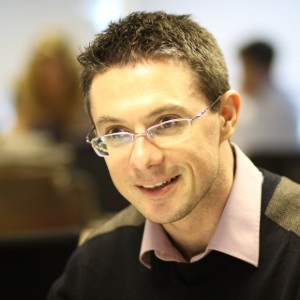 Applying to the Research for Patient Benefit programme

My colleagues and I wanted to test the impact of a children’s emergency department scoring tool I had created, in a different setting to the one in which we’d initially developed it, to find out whether it could be rolled out nationwide.

The tool is called the Paediatric Observation Priority Score (POPS), and I’d developed it with a colleague, Dr Ffion Davies, from the Leicester Royal Infirmary in 2010. It’s a checklist that assigns a score to acutely ill children, based on components such as heart rate, breathing rate, temperature, and the clinical staff’s gut feeling of how ill they are. This makes it easier for staff to assess, prioritise and treat children, helping spot the sickest children quickly and also decide which children can be safely sent home.

We had a few small publications that provided some preliminary evidence to support the tool’s use, which we used to create an app. The Pennine Acute Trust had also looked at our tool and developed a modified version (PAT-POPS), and they’d shown this had improved performance compared to their current in-house scoring system. It was clear that the next step should be a collaborative venture to continue to develop the tool.

What made you apply to the RfPB programme?

It was a perfect fit for what we needed to do - take a developed idea and confirm it was fit for purpose in improving patient care.

The idea came initially from discussions between me and Prof Andrew Rowland from the Pennine Acute Trust, statisticians from Manchester University and academic nursing staff from Salford University - together we developed the proposal over a six month period.

We had all been working together on early PAT-POPS work, and I was the second most experienced researcher on the team. The most experienced person was nearing retirement and didn’t want to lead, so I thought this was a good opportunity to develop chief investigator skills and build my research portfolio.

What sort of support was available to you?

The most useful support came from PERUKI, the Paediatric Emergency Research Network for the UK and Ireland (which I now chair). Their members helped review the proposal and feed back comments which were very helpful to the success of the application.

We discussed the proposal with the Research Design Service (RDS) linked to the Pennine Acute Trust. They were very helpful in regard to patient and public involvement (PPI).

How did patient and public involvement help shape your research?

The PPI group were extremely helpful. For example, they were clear that consent wouldn’t be required in written format when children were being assessed – this enabled patient recruitment to happen at scale; hugely improving the capacity to reach the necessary sample size. The group were also clear and coherent in feedback about poster design and patient leaflets.

How did you go about writing the application itself?

It was very iterative - we drafted, edited, drafted, edited. The key point was nailing down a core primary outcome measure. Once we had decided this, a lot of things fell into place. Peer review was also very useful and certainly helped improve the application.

I was very excited when the project started but actually things were a little slow to being with. The research governance process can take a lot longer than you think - being able to employ a research manager for our project was especially helpful.

Having a team who are all willing to help with different parts of the project has been vital. Once the main study got up and running, having a clear agenda for our team meetings has been very useful to keep us on track.

What are the main lessons you learned?

Prior planning is key. It is likely things will go wrong and you won’t be able to collect information in the way you thought. Make sure you’ve thought about all eventualities, especially when they involve IT.

What benefits do you hope this project will bring to patients and the NHS?

We don’t know what the outputs are yet, but the study is gathering unique information on the case mix of children and young people presenting to small Emergency Departments and Urgent Care Centres. This type of work has never been undertaken before, so it will provide valuable information for other researchers.

What are the next steps for your research?

This particular piece of work will lead on to two or three different further pieces of investigation. Importantly, we want to find out if there are significant differences in patients’ acuity (i.e. their level of illness) and disposition (i.e are they admitted or discharged?) between urgent care centres, district general and tertiary emergency departments.? This is something that has not been studied objectively before in children.

We will also be able to use this work to determine whether change in score is a more valuable aid than a single score itself.

Finally this work also links to another NIHR study I’m involved with, looking at the implementation of scoring systems.

How do you think NIHR RfPB funding has helped your research career?

This RfPB study has been a clear stepping point in my transition from a post-doctoral fellow to an independent researcher. It has been helpful in giving me research skills, as well as the kudos of a competitive grant, and I hope this is the springboard towards ongoing research output.

Any advice for other early career researchers who are considering applying for funding?

The research question you’re asking needs to be clear. It’s easy to get tied up in the details when you’re thinking about the feedback you might get, but what’s important is to have a research question that makes sense to those not interested in your research area, and one that is deliverable. Your core team are vital and you need to know you can work well with them as you will be communicating very frequently!