PGfAR diverse programmes: Understanding causes of and developing effective interventions for schizophrenia and other psychoses

NIHR Programme Grants for Applied Research (PGfAR) is seeking to increase the diversity of study type and design submitted for funding. This case study outlines a novel research design for understanding causes of and developing effective interventions for schizophrenia and other psychoses.

The first episode of a psychotic illness (FEP), such as schizophrenia, can be devastating. Usually the illness first occurs in adolescence or early adulthood, puncturing a crucial phase of personal and social development. Some people never return to their personal developmental trajectory; others may suffer more episodes or long-term disability. The World Health Organisation (WHO) estimates that the perception of family burden associated with psychosis is only exceeded by dementia and quadriplegia.

However, research has shown that people who experience psychosis can and do recover. The sooner treatment is started, the better the outcome and the lower the overall cost of care. Prompted by this evidence, from the early 2000s the NHS rapidly expanded the provision of Early Intervention Services (EIS) for young people aged 14-35 across England.

Evidence then started to emerge that people with full psychotic syndrome endured the condition for months or even years before seeking help or receiving treatment. In addition, people could have a set of attenuated psychotic symptoms, also called psychotic experiences, indicating an at-risk mental state for a psychotic illness (ARMS). How to predict the demand for services and to identify people with early psychotic symptoms became paramount and needed further investigation.

Aims of the programme

The main aim of Understanding causes of and developing effective interventions for schizophrenia and other psychoses was to improve the identification, diagnosis and outcome of emerging and incident psychotic illness. The objectives to achieve this aim included education of general practitioners (GPs) about psychosis, guiding their referrals to EIS; and investigation of determinants of transition from ARMS to FEP.

The programme also aimed to develop web-based prediction tools for the incidence of FEP by social and demographics factors, and geography in order to facilitate NHS EIS planning at national level.

The programme provided a framework to enable the integration of clinical and research experience among healthcare professionals working in EIS and primary care.

Work package 3 defined the incidence and social epidemiology of FEP and ARMS, developing a web-deployed epidemiology tool that, in addition to identifying cohorts for further research, would aid national efforts to target EIS at a local level.

Work package 4 evaluated new ways of liaising with GPs to help them identify and refer young people with ARMS. It involved a cluster randomised controlled trial (the Liaison with Education and General practiceS [LEGS] Trial) testing whether a simple “postal” campaign coordinated from an office was more effective and cost effective than a more elaborate system of personal liaison, based on the Theory of Planned Behaviour, between EIS healthcare professionals and GPs.

Work package 5 involved a two-year follow-up of the people with ARMS identified in the LEGS trial to elucidate common characteristics and determine the proportion that made a transition to FEP (the Prospective Analysis of At-risk mental states and Transitions into psycHosis [PAATh] study). 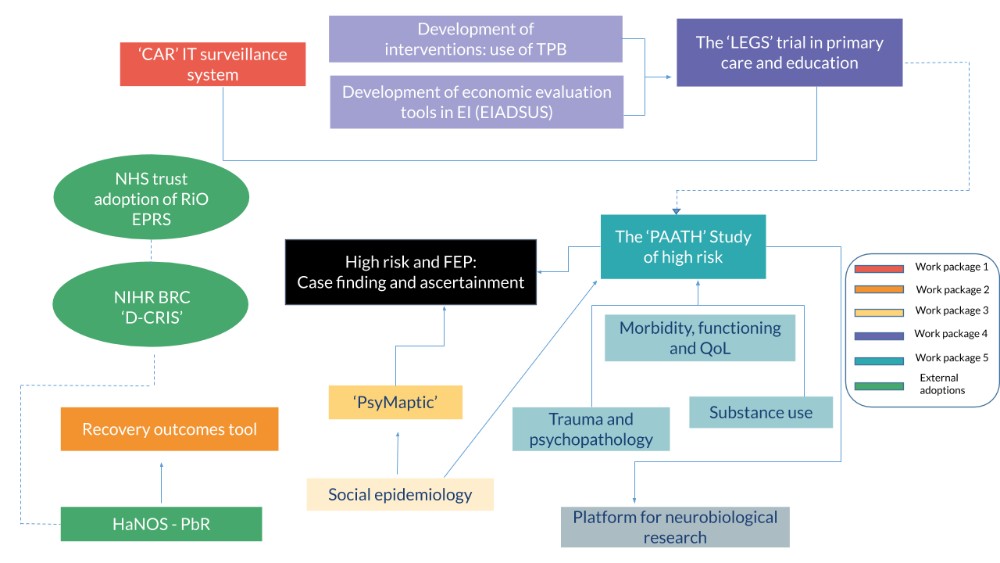 Why was this programme design chosen?

When this programme was designed, there were gaps between the policy blueprint for EIS and existing evidence bases in epidemiology and prognosis. Furthermore, there was an overarching gap between clinical practice and routine applied research in EIS that was necessary to close with knowledge.

This programme ultimately aimed to fill these gaps by exploiting both the natural variance of the host Trust catchment area, which covers an enormous range of demographic, social and environmental characteristics, and the planned and unplanned variation in service developments over time. By developing work from previous epidemiological, health services and descriptive research in the host Trust flagship EIS, CAMEO, the programme intended to run observational studies and comparisons that could indicate what works and what doesn’t work in EIS. Accordingly, one cluster randomised element was included in this programme to tell us more about ARMS and how to detect them.

This programme found FEP incidence rates varied across eastern England but were two to three times higher than those on which EIS specifications were predicated by the Department of Health and Social Care. The overall incidence of FEP was approximately 45 new cases per 100,000 person-years. Findings also suggested considerable psychosis morbidity not only in urban or suburban areas, but also in diverse, rural communities. The most accurate predicting model for incidence of FEP included age, sex, ethnicity and population density.

The LEGS Trial demonstrated that intensive liaison between EIS healthcare professionals and GPs was more effective and cost effective than a postal campaign at identifying people with ARMS or FEP. Thus, increasing the resources aimed at managing the primary–secondary care interface provided clinical and economic value.

Only 5% of the total number of people with ARMS identified in the LEGS Trial and referred to EIS made a full transition to a psychotic disorder over a 2-year follow-up period. This is an important message to young people with ARMS and to EIS: the risk of transition from ARMS to FEP is low over 2 years, especially if people are detected in primary care settings.

However, the programme found that ARMS individuals had high prevalence of moderate or severe depression, anxiety, obsessive-compulsive behaviours and suicidality. ARMS individuals had poor global functioning and low quality of life that, combined with a significant risk of suicidality and histories of childhood maltreatment, justified special attention from mental health services and more appropriate care pathways.

These findings, together with the low transition rates, suggested that clinical interventions in individuals with ARMS should aim at targeting a broader range of psychopathology, especially mood and anxiety symptoms, rather than just focusing on the treatment and/or prevention of a psychotic illness.

What has happened as a result?

This NIHR programme developed our understanding of the social epidemiology of FEP and ARMS. This led to a population prediction tool for FEP, PsyMaptic, which was featured in the 2013 Chief Medical Officer national report and is being used by Public Health England and NHS England to predict FEP incidence and guide funding allocations across EIS nationally.

This programme resulted in primary and secondary mental health care working closely together. The LEGS Trial showed that intensive liaison between EIS professional and GPs improved the access to mental health services for people with emerging mental difficulties, such as ARMS, that otherwise would remain undetected in the community. The findings from the LEGS Trial were used to develop NHS England and NICE new access and waiting time standards for EIS, seeking parity of esteem between mental and physical health.

The PAATh Study added to the evidence that the at-risk mental state has much in common with depression and anxiety, and is not necessarily a harbinger of psychotic illness. Indeed, the whole concept of ARMS has begun to be re-evaluated. This research has been the foundation of a new NIHR PGfAR funding award that is being conducted in Improving Access to Psychological Therapies (IAPT) services in primary care, which aims to support people with common mental disorders, such as depression and anxiety, and also psychotic experiences in such settings.