Data on performance in initiating and delivering clinical research

The NIHR analyses data submitted each quarter to the Performance in Initiating and Delivering Clinical Research (PID) exercise to understand how quickly providers of NHS services are recruiting patients to clinical trials and how they are performing against their contractual requirements.

We analyse trends over time to understand performance of the NHS as a whole. In particular we look at:

We publish a comparison table showing the performance of all NHS organisations that submit to the PID exercise, and trend analyses showing performance across the country as a whole.

Providers of NHS services with NIHR contracts are required to publish their organisation’s performance data on their website.

This graph shows the trend of the time interval between the date that a site was selected for a clinical trial and the date that the first participant was recruited to the trial, for providers of NHS services that hold an NIHR contract. 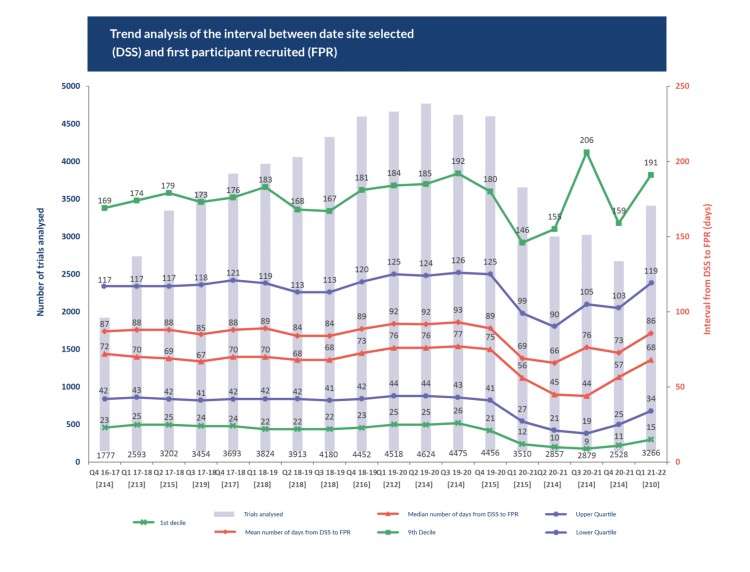 The number trials analysed in a given quarterly submission is shown as bars on the graph, and the number of sites whose data were analysed is included in square brackets on the x axis beneath each quarter. The first quarter reported is Q4 2016-17, which includes 1,777 trials at 214 sites. The final quarter reported is Q1 2021-22, which comprises 3,266 trials at 210 sites.

The average time between date site selected (DSS) and date first patient recruited (FPR; red data points) has remained largely consistent during the four year period shown in the graph, with a mean ranging from 66 days to 93 days and a median ranging from 44 to 77 days. The average number of days until the first participant was recruited has increased overall during the last four quarters (Q2 20-21 to Q1 21-22).

N.B. While submissions are quarterly, the scope of data submitted is a rolling 12 months of data.

This graph shows the percentage of commercially sponsored clinical trials that met their target number of trial participants during the life of the study. 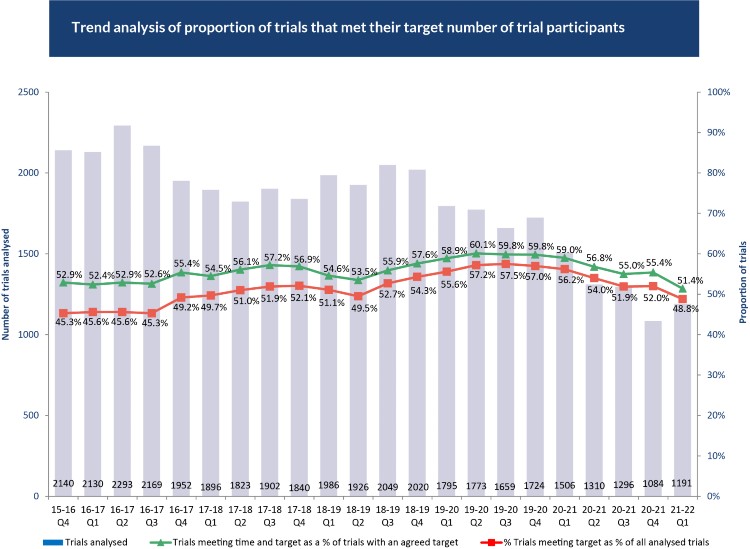 The number trials analysed in a given quarterly submission is shown as bars on the graph, and the number of sites whose data were analysed is included in square brackets on the x axis beneath each quarter. The green data points indicate the proportion of trials that met targets for speed of participant recruitment (time) and target number of participants recruited, shown as the proportion of trials that had agreed targets ('agreed target' means there is both a target number of participants, and a target date to recruit).

N.B. While submissions are quarterly, the scope of data submitted is a rolling 12 months of data.

We also publish a summary of annual data on the performance in initiating and delivering clinical research exercise, showing data by quarter each year for a number of indicators.

We collate and publish data from the more than 200 providers of NHS services that submit data on initiating and delivering clinical research.

This data allows organisations to compare their performance against that of similarly sized providers and collaborate to improve. The data also helps drive increases in the number of patients that have the opportunity to participate in research and enhances the nation’s attractiveness as a host for research.

As of 2018, improvement in clinical trial performance and reducing site set up and participant recruitment time is no longer assessed with a 70 day benchmark. Instead, analyses focus on transparency, accuracy, and meeting sponsor expectations.

Data for each NHS provider

The Department of Health and Social Care requires providers of NHS services to publish on a quarterly basis data on:

Read more about transparency in clinical trial initiation and recruitment.

If you have any questions regarding the PID exercise, contact the NIHR Clinical Trial Performance team on CTP@nihr.ac.uk.