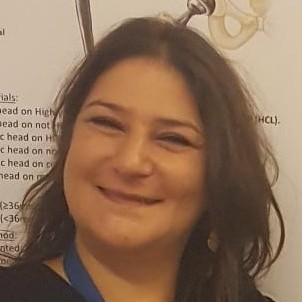 Appying to the Research for Patient Benefit programme

I had moved from the USA to Bristol, starting in a completely new research field as a health economist. I was working as a consultant for the local Research Design Service (RDS), helping clinicians in writing their research proposals.

I felt that a lot of the research questions coming into the RDS could be answered quickly and efficiently with economic analyses. I was working with an orthopaedics team in Southmead who were analysing National Joint Registry (NJR) data and finding that metal-on-metal (MoM) hip prostheses, which were more expensive than traditional metal-on-plastic implants, were more likely to fail. Surgeons were moving to even more expensive new ceramic implants, as MoM were withdrawn, and there was not enough evidence whether these new implants were truly worth the extra cost.

I suggested that we use trial data that was already published and registry patient data to build a large economic model where we could compare ALL implants at the same time. I knew we could do it for a fraction of the cost of a trial and still achieve results that could change clinical practice and patients’ lives

I developed the skeleton of the idea and bounced it off Professor William Hollingworth, the head of the economics group at Bristol. I wanted to lead this research but I was not sure the RfPB panel would support a proposal from someone so early in their career - I was a senior research associate at the time. I was advised to put Professor Ashley Blom, a well-known surgeon, as the principal investigator (PI).

I wanted to do a large systematic review with a network meta-analysis and then to build an economic model on the same network of implants compared. We identified 33 different types of implants and found a way to compare them all simultaneously.

I wrote a plain English summary and Amanda Burston (patient and public involvement facilitator) put me in touch with patient groups who helped me shape it up. For patients, the most important outcome is function and quality of life, but this is highly tied up with not needing further surgery. Although clinicians are happy for an implant to last 10 years, patients are expecting a much longer life span from their prosthesis.

My colleagues at the RDS were incredibly supportive in finding the right people to talk to. They helped me set up my budget and think about intellectual property and all the research governance issues I would have to face.

After months of work, and against some scepticism that such an inexperienced researcher could do it, I realised that I had put together the whole research proposal. I felt I deserved to be PI. The team supported my decision and there was never again any doubt I could lead the project.

I submitted my proposal in January 2013, and in July I learnt that I was not successful. I was very disheartened. But the external reviews were incredibly supportive of the project, and the last bullet point of the committee feedback said that I should consider reworking the proposal.

I discussed the feedback with my team and the RDS and resubmitted it in September 2013. I was determined to succeed - and in March 2014 I learnt that I had! It felt like an achievement equal to completing my PhD dissertation.

I was on cloud 9 for a while… then the complications started. I had to work with the trust and the university to decide who should be the project sponsor, and we also had some serious issues getting access to the data we needed from the National Joint Registry.

Meanwhile, the systematic reviewer on the team moved on to a different job and I needed to recruit someone new. This delayed the start of the project, and then the start date changed again due to issues with the finance department. I must have aged a decade in these months prior to study start.

There were a lot of problems with bureaucracy at many levels and with the different collaborators, but my team were amazing. All the senior professors were incredibly supportive and helpful, and the junior people way surpassed my expectations. They came to the meetings I organised, they were truly interested and cared a lot about the success of the project. I owe our success to my team.

Our BMJ paper shows that there is no evidence that any implants, even the most expensive and newer ceramic implants, are better than the traditional small head cemented metal-on-plastic implants, in use in the NHS since the 1960s. This was very reassuring to patients and quite surprising to clinicians.

Our economic models have shown that no matter how much time and effort an uncemented implant may save in theatre, cemented implants will always be more cost-effective even for younger patients – they cost less and fail less over the longer term. This is a ground-breaking result as most new surgeons perform mainly uncemented surgeries, particularly in the younger, more active patients.

Our study findings will be contributing to NICE guidelines when they are updated. We produced a video to explain the findings to patients, and published lay abstracts and press releases.

Manufacturers do try to convince surgeons that newer and more expensive implants are better. We have found that older and cheaper can work best for most patients.

Never ever doubt yourself and don’t lose courage. In my life I have failed as much as I have succeeded – keep on moving on.

The RfPB programme is your friend. It is full of helpful, nice people whose job is to support passionate, hardworking, researchers to succeed, no matter how research naïve they may be. Also share your ideas with the RDS - they are amazingly skilled and experienced and will help you achieve even the smallest of your milestones.

Your success is dependent on other people. Build the relationships you need and take care of your team as a whole – never forget the junior people. And organise drinks at the pub to celebrate your successes (I know the NIHR does not fund this, but it’s money well spent!).

Plans for the future

When I was on the conference circuit presenting results from my HIPS study, surgeons often asked – how about the knee? Every surgeon has their preferred knee implant without much evidence behind it. So I now have RfPB funding for a new piece of research looking at knee implants. I am also expanding from our work in HIPS to design a new programme of studies on implants for younger patients and apply for an NIHR Programme Grant for Applied Research.

RfPB funding has been fundamental in my career. It has almost exclusively funded my time on this and other projects throughout the years and has supported me into becoming an experienced researcher. I owe my career development and success to three things: hard work, great working teams, and the RfPB funding. None can work without the other and they’re all equally important.