Sam Tilling took part in a study after having a major haemorrahge. 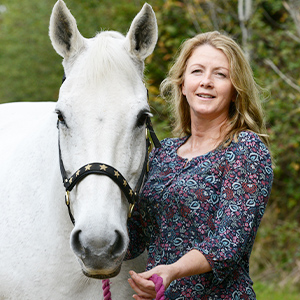 Sam Tilling, 51, from Upper Slaughter, Gloucestershire, suffered a major haemorrhage and ruptured spleen when her horse, Warrior, rolled over her after a fall on a cross-country ride in October 2010. She remembers feeling “only lightly dazed” and continued to ride although soon she felt dizzy and very unwell. “I could feel something bleeding inside,” says Sam, remembering the accident. “I was back on my horse but I knew things were really wrong.”

An air ambulance took Sam to John Radcliffe Hospital, Oxford, where she was rushed into the Emergency Department, requiring an emergency operation to remove her spleen that had ruptured and caused severe bleeding.

Sam agreed to take part in a research study called ACIT that was designed to gather information around the best ways of treating major blood loss. 3500 trauma patients were recruited to ACIT, from countries including Denmark, Germany, Norway, the Netherlands, Sweden and the USA.

Sam said: “I’d heard about clinical research studies before my accident, so I knew it was going to be safe and everything was explained to me really clearly. I was treated with the best treatment at the time.”

“When the doctor from the trial team came to see me a few days after my operation to explain the study I realised it was a way for me to help other people.”

Clinical research isn’t always about having drugs tested on you, it’s about people following through your treatment and finding the trends in existing care, what works and what doesn’t.

"I recovered quickly from the operation although I have to be careful because my immune system is weaker, but my life got back to normal fairly quickly. I was back riding – slowly – after a couple of months. I was lucky.I can’t imagine never riding again – it’s a way of life for me.”

The observational ACIT trial looks at the clotting system of the body and how it is affected after trauma. It led to the CRYOSTAT-1 study, investigating the treatment of people with major blood loss when they go on to have a blood transfusion.

Patients who have severe bleeding after injury develop a problem with their clotting system which means that they tend to bleed more. One of the main problems is due to low levels of a clotting protein normally circulating in the bloodstream called fibrinogen. Fibrinogen acts as the ‘glue’ which holds a blood clot together and at low levels, blood clots don’t form properly and bleeding can continue. The treatment given to patients is cryoprecipitate, a frozen blood product rich in fibrinogen.

After taking part in ACIT, Sam became a patient ambassador for CRYOSTAT-1, which took place in two major trauma units in hospital in the UK and at Camp Bastion, Afghanistan.

CRYOSTAT-1 showed that it was possible to transfuse cryoprecipitate quickly in patients. Findings showed that early cryoprecipitate therapy maintained higher blood fibrinogen levels during active bleeding, and improved survival in the treatment arm of the study.

CRYOSTAT-2 will test the effect of early cryoprecipitate (within 90 minutes of admission) compared to standard blood transfusion therapy, on 1568 severely bleeding trauma patients at all Major Trauma Centres across England and selected international partners in North America. Patient recruitment began in July 2017 and the trial will run for 36 months. The study will provide the answer as to whether early cryoprecipitate transfused for major traumatic bleeding saves lives.

“It does take time to be involved in a study, to travel and attend appointments in the city but it’s worth it,” says Sam, who now acts as a patient ambassador for CRYOSTAT-2.

It’s been great to be listened to by the study team and the doctors about my experiences.

“If it means that guidelines are developed for treatment of people like me who’ve had major blood loss and lives can be saved it’s worth it. It’s great to be able to give something back to the NHS.”